When ‘FOUR PAWS’ invites journalists to accompany an international rescue mission, it is rarely for a pleasant topic. This time was no exception. The trade of dog meat and the visit of the corresponding slaughterhouses in Cambodia is the kind of press trip that no one in our medium is interested in. Many colleagues warned me; others admired me for my courage to face the terrible pictures and to enlighten about the fate of thousands of four-legged friends who end up on plates after great suffering.

I had to take the courage to stand by and watch helplessly.  Already the first five minutes of our mission tested my limits. When i left the car, my first gaze fell on a dog hanging from a gallow, fighting for his life. It felt like an eternity until the light of life left the poor animal. In that exact moment, it seemed like the other dogs squeezed into cages realised what was going to happen. With a cramping stomach and a throbbing heart, I held on to the camera - after all, this is my job as a journalist - but even while I took their pictures, it was clear to me that these pictures could not be shown to anyone.

The first shock was followed by more. What happens to the dogs in this industry doesn't even deserve the term ‘keeping’. The most popular killing methods are drowning, hanging, beating to death or stabbing. Rarely does a dog get away without any death struggle, some of them are even still alive when they go into the boiling water. On the ground are bloodstains everywhere, in the air stench and flies, beside the slaughterhouses sacks full of scraped off dog fur - a true nightmare in a holiday paradise.

Despite all this, I would always decide to accompany a FOUR PAWS mission again. All of these atrocities must be shown to the world. The overwhelming feelings should be written down on paper, to bring my readers on board, and together, achieve the impossible.

Part of the mission was to visit Kheav Chan, who has slaughtered dogs for years to bring his family through. Poverty plays an important role in this industry. However, now, Chan has been given a chance to build up a new existence without suffering. The animal welfare organisation bought Chan a rice field - he will never kill another dog again.

The emotional moment, when Chan apologised tearfully to the remaining dogs, can hardly be put into words. It is also wonderful to see how the man proudly showed us around his new piece of land, where he will soon be growing rice and selling water from a well.

At the same time as animal welfare, human protection must take place; and FOUR PAWS understood this a long time ago. Taking the livelihood of a poor man without creating alternatives will not have any lasting effects. The trade of dog meat in Cambodia is also a health threat for the population - there are high rabies rates, little knowledge about how to recognise it, and how to avoid infection. There needs to be education instead of accusation, discussions with business and politics and precaution in the form of castrations and vaccinations for both owned and stray dogs.

We were allowed to take the ten remaining dogs of Kheav Chan with us and give them a second chance in life – just a dent in this horriffying trade, but nevertheless, balm for the soul. Now, these dogs are being well cared for; they are being rehabilitated and given a safe place to stay. I am looking forward to staying informed about their destiny. 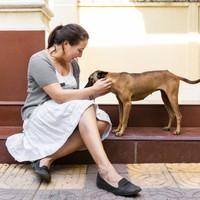 Editor at the ‘Krone Tierecke’

Denise has been working for the Kronen Zeitung for twelve years, writing print, online and social media articles for their animal welfare department. She has accompanied our work in a dog slaughterhouse in Cambodia and has written down her experiences in the Kronen Zeitung and for our blog.