As the novel Coronavirus outbreak rapidly spreads through more and more countries and takes more and more lives, we need to take measures to reduce the chances of this ever happening again.

At the end of December 2019, China reported several cases of pneumonia in Wuhan, a major city. Within days, Wuhan’s Huanan Seafood Wholesale Market, where several of those infected worked, was shut down. The disease has rapidly spread and as of the 4th of February is now present in 25 countries, with the disease having taken 425 lives and having been confirmed in more than 20,000 people. At this point in time, nobody can say how many more countries will have infections, how many more people will be hospitalized, and many more lives will be taken.

The Huanan Seafood Wholesale Market, despite its name, does not sell just seafood – also available were hundreds of live animals for sale, including turtles, snakes, rats, wild cubs, as well as cats and dogs for the meat trade. While the exact origin of the disease has not been established, current thinking is that it is very likely that the virus, originating from an animal, was first spread at this market.

This is not the first time this has happened. A key event in the 2002-2003 SARS-CoV (Severe acute respiratory syndrome-related coronavirus) outbreak was its spread through wildlife being sold in a market. After this outbreak and understanding of the risks of live animal markets, China banned wet markets – however, they were allowed again within six months.

A single market can allow mixing and close contact between millions of animals and people every year, with these animals coming from thousands of different and often unknown sources. Markets such as Huanan, selling all different kinds of species, are not only present in China – they are seen all over Asia. Outside of the disease risk, these markets almost always present severe welfare issues for all the animals involved, as they watch their companions roughly handled and slaughtered for their meat.

We and our partners have seen and documented similar situations as to what has been seen at Huanan Seafood Whole Market – an obvious overlap in the trade of wildlife, cats and dogs – across Southeast Asia. These markets serve as a deadly breeding ground for viruses and other diseases and for its spread to humans. Outside of the risks of rabies posed through the dog and cat meat trade that have already been documented and present a deadly risk to both those in these markets and the general public, we are now seeing the potential risk of new emerging viruses from these very same markets.

This outbreak demonstrates, additionally, how cruelty and apathy towards animals is closely linked to human suffering. The illegal capture, transport, holding and slaughter of dogs and cats across Asia is simply a public health nightmare waiting to happen.

China has taken recent action to stop all wildlife trade to reduce further risk of disease. However, this will not be enough to prevent similar outbreaks in the future – there is a need to close all live animal markets, including and especially those that trade in dogs and cats for their meat. By taking this step, governments will not only take definitive action towards protecting their citizens and the global community but will also take a giant leap towards building a kinder world for us all.

We didn’t take strong enough and sustained action after SARS-CoV, and the world is now paying the price. 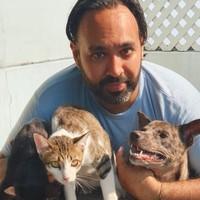 Born and bred in Thailand, Karan graduated from the University of Sydney in 2008 as a qualified vet and has worked four years in private veterinary general and specialist practice in Australia. In Asia he has worked as a vet to fight transboundary animal diseases in Southeast Asia and China. Following this Karan worked for World Animal Protection on delivery a campaign to end the bear bile industry in Asia.

Karan joined Four Paws in 2019 as the Project Manager working with a core team to develop and deliver an international campaign to end the brutal dog and cat meat trade in Vietnam, Cambodia and Indonesia.